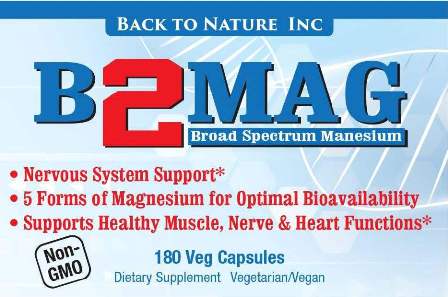 5 Forms of Magnesium for Optimal Bioavailability

Magnesium is a mineral that is critical for energy production and metabolism, muscle contraction, nerve impulse transmission, and bone mineralization. It is a required cofactor for an estimated 300 enzymes. Among the processes that require magnesium are fat and protein production, as well as glucose metabolism. B2Mag combines five different forms of magnesium for maximal absorption and utilization.

WHAT SHOULD BE CONSIDERED WHILE CHOOSING A MAGNESIUM SUPPLEMENT?

Magnesium is involved in about 600 different biochemical processes in our body, so its deficiency has very serious and negative consequences for our health. The most common diseases associated with chronic magnesium deficiency are cardiovascular diseases (hypertension, atherosclerosis, ischemic heart disease) and type 2 diabetes.

The importance of magnesium for human health was often emphasized by the late professor of medicine Julian Aleksandrowicz, who was a world-renowned hematologist and author of the book “There are no incurably ill people”, which is still popular today. He believed that the deficiency of this element in the body could cause cancer, especially malignant blood cancers (leukemia).

Low levels of magnesium in the body are manifested as follows:

– a feeling of numbness and tingling in the limbs,

Most of the population of the United States suffer from magnesium deficiency, which is related to:

– gastro-intestinal malabsorption, which is dependent on general health, taking prescription drugs and is impaired by alcohol, coffee and phosphoric acid in carbonated drinks,

– emotional stress and lack of sleep,

– nowadays, plants are grown most often in soil with too little magnesium and other minerals,

– taking prescription drugs (diuretics and drugs that lower the amount of hydrochloric acid in the stomach) often causes magnesium deficiency.

Due to the problems that may result from the lack of sufficient amounts of magnesium in the body, it is advisable for many people to take it in the form of a supplement.

There are many types of magnesium-containing products available on the market, and when purchasing this type of supplement, you should pay attention to the form of magnesium in the product, i.e. in what chemical combination the magnesium is present in it. Magnesium is not absorbed from the gastrointestinal tract as a metal and must be combined with a chemical group for this purpose. The easiest and cheapest to produce is magnesium oxide, which is the worst type of magnesium supplement because it is poorly absorbed from the gastrointestinal tract. This form of magnesium also reduces the acidity of the stomach, which can impair protein digestion in many people. Magnesium oxide is therefore best avoided and to do so, it is a good idea to check the composition of the magnesium supplement you are going to buy.

B2Mag (Broad Spectrum Magnesium) it is a magnesium supplement, which is the source of as many as five of its combinations, which have very good bioavailability for our body. The product contains citrate, taurate, malate, glycinate and magnesium aspartate. A magnesium supplement with such a wide spectrum has a very versatile effect supporting our body.

Five kinds of magnesium in our broad spectrum product are:

– magnesium citrate, which is one of the most popular magnesium supplements, well absorbed from the gastrointestinal tract and causes diarrhea in higher doses (therefore it is used in constipation),

– magnesium taurate, which is most often used in hypertension and to regulate blood glucose levels,

– magnesium malate, which is well absorbed from the gastrointestinal tract, rarely causing diarrhea and is most often used in fibromyalgia and chronic fatigue syndrome,

– magnesium glycinate used most often in anxiety, depression and insomnia,

– magnesium aspartate, used in the tendency (hypersensitivity) of skeletal muscles to painful cramps.