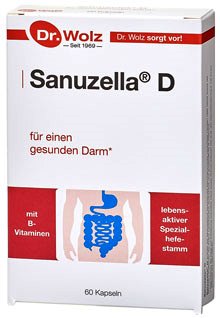 Probiotic for detoxification and with functional and inflammatory intestinal disorders

Sanuzella® D contains a combination of the medical special yeast Saccharomyces cerevisiae CBS 59266 and the probiotic strain Lactobacillus acidophilus as well as the vitamins B1, B2 and B6. Due to the antibacterial, antisecretory and immunological effect of Saccharomyces cerevisiae CBS 5926 the uses for Sanuzella® Dare intestinal disorders, and functional and also inflammatory intestinal disorders. This medical special yeast is considered to be the most extensively examined probiotic. Saccharomyces cerevisiae CBS 5926 is used both preventively and curatively, above all in the domain of diarrhoea. There are numerous studies available. A systematic and meta-analysis of 31 randomised, placebo-controlled groups of treatments in 27 studies with 5,029 patients concluded that Saccharomyces cerevisiae CBS 5926 was significantly effective in 84 percent of the treatment groups. According to this, use of the medical special yeast is recommended to prevent antibiotic-related diarrhoea and Traveller’s diarrhea, to prevent diarrhoea caused by enteral nutrition, to reduce symptoms triggered by Helicobacter pylori, to prevent the return of diseases caused by Clostridium difficile to treat irritable bowel syndrome, acute diarrhoea in adults, chronic-inflammatory bowel disorders and other diarrhea types.

The special yeast Saccharomyces cerevisiae var. boulardii impresses with an antibacterial (binding of pathogens, formation of bactericidal active substances, destruction of bacterial toxins), antisecretory (increase in water absorption from the bowel) and immunological effect (increase in IgA, unspecific immune stimulation). In addition yeast increases enzyme activity (substitution of saccharase, induction of commensal colonic enzymes): It is resistant to gastric juice and able to live and multiply in the intestine.

Notes In the case of CIBD the product should not be given during the phase of the inflammation, but afterwards in order to prolong the remission, Suitable for diabetics,

Be the first to review “Sanuzella® D Darmkapseln” Cancel reply