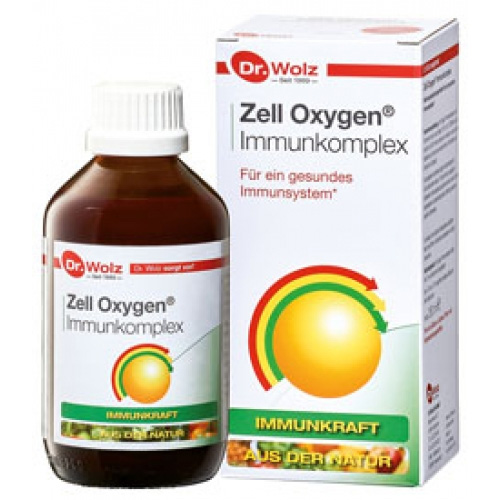 Dr. Wolz Zell Oxygen Immunkomplex is a natural daily supplement which aims to support and maintain optimum immune health.
It combines a selection of natural immune boosting ingredients including beta-glucans, enzymes, coenzymes, amino acids, trace elements, vitamins and phytochemicals. These key nutrients are derived from fruit and vegetable concentrates.
The ingredients are carefully researched and chosen for their ability to promote good health from the root of health issues – the cells.

Who should take Enzyme Yeast Cells?

Generally it can be said that Enzyme Yeast Cells are good for anyone wanting to do something to benefit their cell health and vitality, wanting to prevent the symptoms of premature aging or disease or wanting to boost their immune system.

But there are, of course, also certain people who Enzyme Yeast Cells especially benefit. We want go into these groups of individuals in somewhat more detail here.

Who should take Enzyme Yeast Cells?

For invigorating and strengthening older people

Additional provision of vital substances makes particular sense for the elderly. This is often due to a lower need for energy, but a requiremem for vital substances which continues to be uniform as in old age the body is usually less able to produce them. Furthermore, as we age the body’s capacity to detoxify and capacity to repair cell damage that has arisen also diminishes. This also decreases the immune funcrion in old age. A lack of phytochemicals and antioxidants is conducive to certain age-related diseases such as dementia or Alzheimer’s , as has been determined in a clinical study by the Marienhospital in Herne. Of course, proper balanced nutrition would already have a big effect here. But old age often brings additional complicating factors which encroach on choosing the right food and in sufficient quantity. Aging changes how hunger and thirst ate perceived: many elderly people have no appetite and drink too little. Even  the perception of taste changes. This is often aggravated by trouble chewing and swallowing, damaged teeth, listlessness or psychological problems due ro loneliness. In addition, many senior citizens constantly have to take medicines. This can aggravate the utilization of certain vital substances such as calcium, vitamins A, B1, B2, C and folic acid or the trace elements, iron and zinc. As old people mostly eat too little fish, they often suffer fom iodine or vitamin D deficiencies. Since many elderly people have too little movement in the open air, their skin is unable to form enough vitamin D. So vitamin D deficiency is very frequent in the elderly. This can lead to osteoporosis, bad-temperedness or high blood pressure.

So an additional supply of key nutrients is particularly important for the elderly. Enzyme Yeast Cells are a good source of vital substances for the aged as they contain all the key vitamins, minerals and trace elements in addition to many valuable enzymes and bioactive substances which can be absorbed by the body.

For boosting performance in sport and at work

Whether professional or amateur: intensive athletic training results in free radicals damaging muscle cells. Every muscle strain is a sign of this cell damage. Sport brings very many free radicals to the fore. Then during regeneration the immune system is more involved clearing up cell debris than fending off infections. Susceptibility to infections and injuries increases, training and performance slacken. Experts term this phase “open window.”  Enzyme Yeast Cells shut this “open window” by supplying muscle cells with selected biological ingredients that plainl)’ reduce muscle stress and inflammatory reacrions. In addition, enzyme yeast cell preparations for athletes feature a particularly large capacity to neutralize free radicals. This results in fewer muscle cells being damaged, meaning the immune system is strengthened, regeneration time is shortened and performance improved. Why is that so? Enzyme Yeast Cells supply the organism with essential nutrients which favour the immune system and muscle metabolism due to their biological properties. They contain amino acids, minerals, trace elements fortified with selenium and vitamins which act as anti-oxidants. Special enzyme yeast cell preparations for athletes (e.g. Sanuzella®  ZYM sportsline) also contain an abundance of phytochemicals, flavonoid extracts and the coenzyme QlO, which boosts the impact of the biological ingredients even further and positively counteracts mental and physical stress. This positive effect has been proven by several research papers. For example, Freiburg University tested the effects of the enzyme yeast cell preparation Sanuzella® ZYM on physical performance and cell stress over a six-week period on a group of endurance athletes. Result: taking Enzyme Yeast Cells resulted in an optimum utilization of oxygen and a plain decrease in oxidative stress. Sanuzella® ZYM has an ORAC value of 8,500 mmol for each daily dose. which is a very high value. This enables free radicals to be optimally bound and disarmed in rhe blood. As a comparison: rhe ORAC value of 300 grams of oranges is 750.  No wonder that numerous sport doctors, high performance athletes and trainers advise using Enzyme Yeast Cells. The users include Olympic reams such as Germany’s team of eight, Bundesliga clubs such as FSV Mainz 05 and  FC Ingolstadt 04 and many other topclass athletes who systematically integrate Enzyme Yeast Cells into rheir training plans to srabilize their health and optimize their performance across an accelerated phase of regeneration. This beneficial effect is not only of significance to athletes. Individuals suffering work-related stress also benefit from the positive impact of Enzyme Yeast Cells on regeneration and performance,

For sufferers of burnout syndrome or CFS

If you are continually experiencing farigue, exhaustion and listlessness, do nor take it lightly. For you may be suffering from burnout or chronic farigue syndrome (CFS). Nothing precise is yet known about the causes of CFS. But it is of note that there is a disrupted expression of genes which are key to metabolizing energy in CFS patients. What does this signify? All cells require energy to survive and fulfil their role. We obtain this energy from specific nutrients which our food supplies us with. These are then broken down by enzymes in each cell. CFS sufferers do not appear to have a sufficient supply of these nutrients available, i.e. not enough energy can be manufactured. In his research the Australian doctor and researcher, Dr. Roben Buist of the International Society for Clinical Nutrition came to the logical conclusion that chronic fatigue syndrome indicates an oxygen deficiency syndrome brought about by disrupted mitochondrial function. To circumvent this “hunger for oxygen” in tissues, he employs Enzyme Yeast Cells for chronic fatigue syndrome wirth demonstrable success. The reason: Enzyme Yeast Cells result in improved cellular respiration. Other scientists, such as Prof. Ewald Dorling of Hamburg University, also concluded thar Enzyme Yeast Cells boost the body’s capacity to react appropriately to physical, chemical and biological stimuli and so contribute to improved vitality and performance.

For chronic diseases or recurring infections

Owing to their beneficial impact on our immune system and their vitality boost Enzyme Yeast Cells are also ideally suited to sufferers of chronic disease or people who always get colds. To prove the immune system boosting and revitalizing effect of Enzyme Yeast Cells, a total of 786 patients underwent treatment with the enzyme yeast cell preparation Zell Oxygen® immune complex by Dr. Wolz as part of a holistic-biological therapy at Wolfgang Spiller’s practice for naturopathy in Villingen-Schwenningen from January to December 2010. The patients were afflicted by chronic-degenerative diseases, joint diseases, gastro-intestinal problems, high blood pressure, depressions, tumours and autoimmune reactions. Five and more diagnoses were not uncommon and they were under long-term medication. These patients received three 30 ml daily doses of Dr. Wolz Zell Oxygen'” immune complex over a three-month period to improve both immune response and oxygen utilization in their cells. The result: after the therapy virtually all the patients reported a clear general increase in performance, increased vitality, improved concentration and a better psychological balance. Symptoms had partly or fully disappeared, medication was able to be reduced or stopped, i.e. Enzyme Yeast Cells are not only appropriate for prevention, but they can also provide significant support to the immune system and cell respiration during a period of illness. Enzyme Yeast Cells help the body to bounce back following periods of illness.

We already alluded to the fact earlier on that the trigger for developing Enzyme Yeast Cells was Siegfried Wolz’s vision of finding an orthomolecular preparation for warding off cancer biologically. Siegfried Wolz had already recognized the meaning of mitochondrial cell health and oxygen deficiency syndrome long  before the danger posed by “free radicals” and the major benefit of antioxidants were widely recognized. Having said that, leading naturopathic cancer specialists such as Dr. Josef Issels and later Julius Hackethal also made use of Enzyme Yeast Cells. Nowadays they are well anchored as part of complementary cancer therapy. Naturopath Prof. Serge Jurasunas of the Capital University of Integrative Medicine in Washington/USA has already used Enzyme Yeast Cells on several thousand cancer patients and observed a clear improvement in blood counts and the immune system following the therapy. As Enzyme Yeast Cells deliver all the nutrients to human cells that they require for a healthy metabolism, they can offset the deficiencies in the supply of micronutrients which occur from, for example, chemotherapy and radiotherapy. But what is the hidden key to the beneficial impact of Enzyme Yeast Cells on cancer patients?  A considerable factor is the beta glucans. Chemo-or radiotherapy, unfortunately, not only damage cancer cells, but also compromise immune cells. This results in cancer patients being better targets for infections and also having less defence against potential metastases . Beta glucans stimulate the immune system and so reactivate resistance to pathogens in weakened cancer sufferers. Studies from Japan have shown that glucans significantly lower the mortality rate of cancer patients from infections (4.8% vs. 30% in the control group). Beta glucans, as demonstrated by several studies, are also shown to have antimicrobial, anti-inflammatory and anti-arteriosclerotic properties. Beta glucans sourced from Enzyme Yeast Cells can shield from infections during and after surgery. Enzyme Yeast Cells can thus reduce the use of antibiotics.

Be the first to review “Zell Oxygen Immunkomplex” Cancel reply